Discover the platform that allows you to create webapps in seconds, in order to communicate with the viewer!

Discover the platform that allows you to create webapps in seconds, in order to communicate with the viewer!

This time it was Pantalha and GoRate that challenged one of their customers - the action sports channel FUEL TV - to try an innovative solution that would allow their viewers to actively participate in the broadcast of their programs.

After the announced partnership between Pantalha and GoRate's innovative technology, it remained to find the right customer to introduce one of the most interesting interactivity solutions on the market. FUEL TV emerged as a natural User Case, given its existing interaction with its audience, namely during the stages of the World Surfing Tour, which broadcast live and exclusively.

Until now, FUEL TV used a tool to extract comments on Facebook and Instagram to put on air questions that its audience asked during the broadcast of these events. With the GoRate tool, the broadcaster expanded its interaction possibilities through QR codes provided by GoRate. These QR codes allow the tv channel to define a series of questions in form format, with the possibility of them being formatted for answers from “Yes/No”, “Rating from 0 (zero) to X”, “Lists with options” and “Boxes of Comments”. Once live, viewers simply scan the code through their smartphone cameras where they will have access to the WebApp that allows them to send their responses. 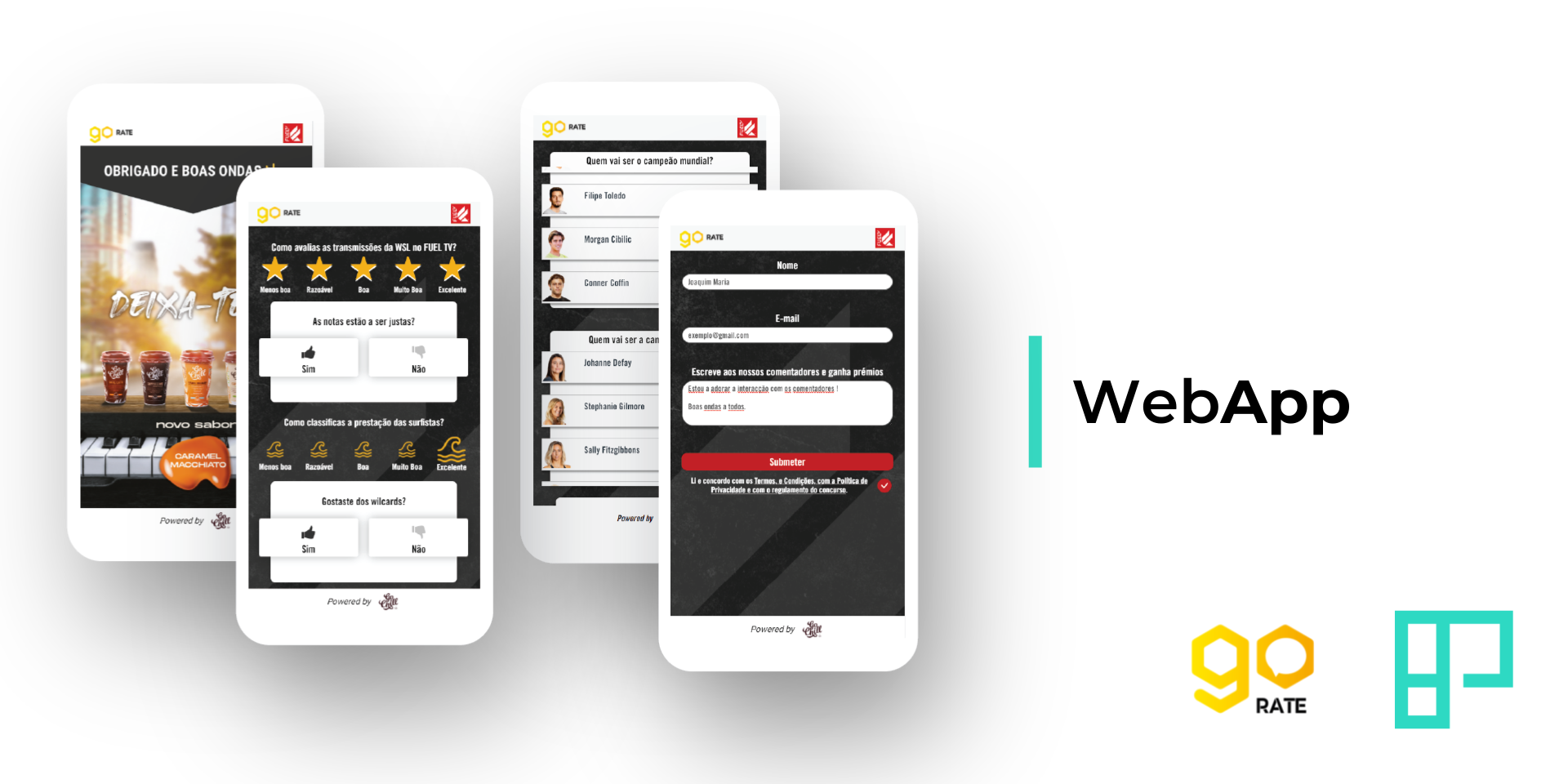 From a technical perspective, the solution is simple. FUEL TV has access to a back office that allows you to manage questions and comments, as well as generate personalized graphics with data from the audience's responses, which you can then place in your feed so that the audience feels the validity of your vote and/or comment. These graphics can be generated in TV and/or social media formats, to easily integrate with all necessary broadcaster platforms. After the success of this solution in the Corona Open Mexico stage of the World Surf League, with more than 2500 viewers accessing the QR code, of which more than 90% actively participated and more than 65% left their comments, FUEL TV has returned to bet in this solution for the men's and women's finals of the World Surf League that defined the champions of the year 2021. With the success of the previous stage, FUELTV managed to attract new sponsors for the finals that resulted in double the comments left on the platform. Note that the final stage was only 1 day, compared to the 3 days of the previous stage.

“The participation surpassed all expectations and the interactivity between the public and the commentators was absolutely incredible”, emphasizes Ricardo Rosa, Co-Founder of GoRate, one of the partners responsible for developing the project together with FUEL TV. Gonçalo Madeira, CTO of FUEL TV adds: “The simplicity of the tool is an asset to any live production, and the interactivity with the audience, one of the main focuses of FUEL TV, was a great success. We are excited to continue this partnership with GoRate and Pantalha!” With the possibility of having Giveaways, Powered By's, Landing Pages and even advertisements directly inserted in the application, in addition to the technological added value that GoRate brings to the broadcaster, it also allows the profitability of the solution through the visibility it gives to platform sponsors and with that, create an additional means of revenue that exceeds the investment in the platform, allowing its clients to attract more and new sponsors who want to reach the audience in a more direct way. All this on a truly customizable platform for each brand.

To learn more about this solution, get in touch!

Other User Cases
Fuel TV integrates VSN
Fully automated workflow for the entire file, traffic and playback system
FUEL.TV chooses Intinor
A solid content distribution solution for even the most remote events
RTP choses IP intercom technology
Pantalha provides complete RTS intercom solution based entirely on IP technology
See all
Want to know what we can help you with? Contact us.